What causes Flashes and Floaters? 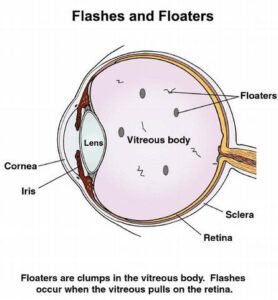 The interior portion of the human eye is filled with a gelatinous substance called vitreous. With advancing age, the vitreous gel liquefies and eventually pulls away or separates from the retina to which it is normally attached. This process is called Posterior Vitreous Detachment (PVD) and is a normal event occurring in most people somewhere between the ages of 40-70 years.

During this separation or PVD, the pull on the retina is perceived by some people as a Flash of light. These may occur anywhere in the field of vision. If the gel is abnormally adherent to the retina, or the retina is weak in a certain area, a retinal tear can occur. Once a retinal tear develops there is a significant risk of the liquid vitreous going through the break and causing retinal detachment. Any opacity in the vitreous, which comes in the line of vision, is perceived as Floaters. Even normal vitreous may contain some opacities which are perceived as floaters. During PVD, the debris generated in the vitreous may lead to sudden increase in floaters.

Also sometimes, during the separation a blood vessel of the retina may rupture with or without retinal tear and can cause vitreous hemorrhage (bleeding in the vitreous) which is perceived as shower of floaters. Large hemorrhages can cause large dark blobs in the visual field or an overall decrease in vision.

What to do once Flashes or Floaters are noticed?

If you have symptoms of a PVD (floaters, flashes, and shower of spots or gray areas approaching from the side) it is important to have a prompt and thorough examination of the retina so a search can be made for any retinal break or other pathology. Fortunately the great majority of PVDs do not cause a retinal tear and not all tears will lead to detachment.

How is retinal break or tear treated?

A retinal break or tear can be treated by a simple preventive procedure of Laser or Cryopexy, as an outpatient procedure. These procedures create an adhesion between the retina and the underlying tissue by forming a scar tissue. This scar tissue prevents the seepage of liquid vitreous under the retina and thus prevents retinal detachment. These preventive procedures are virtually harmless and are very effective (95%) in preventing the more serious retinal detachment.

What happens to the Flashes or Floaters?

Following a PVD, it is expected that the floaters and flashes slowly diminish over a 3 month period. Once it has been determined there is no underlying retinal tear or detachment, the floaters may be considered irritating but harmless. With time most floaters tend to become less bothersome and often disappear. If new floaters appear in future, they need to be examined again to determine if they are harmless or a symptom of the more serious retinal tear or detachment.

Once the retina detaches, it must be operated upon on an urgent basis to reattach the retina. If operated early, the results are generally quite good with significant gain in vision. A delay in surgery decreases the chances of success and the vision gained is also limited.